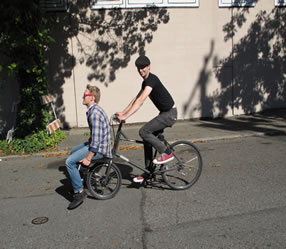 We’ve been pretty stubborn over the years about electric bikes, not so much with the practicality of power assist but mostly with the horrid aesthetics of many of them.  The batteries are the main culprit, big bulky things that diminish the sleek silhouette of a bike frame, some brands have done a good job hiding them in rear racks etc. but those lack any serious power to go long distances.  Now before anyone points out that we don’t know *#@* about what we’re talking about, let me just say we know we DON’T.  That’s why we’re partnering up with our good friend and neighbor Dave Hawkins around the corner at Electric Bikes N.W. to experiment putting his E-Bike Kits on some of the bikes in our stable.  So far we’ve electrified the Civia Halstead and I can say it’s made a pretty useful mini Cargo Bike into a undaunted errand machine. The Halstead has the cantilevered front rack over the front 20″ wheel which by itself makes pushing cargo much easier than a fork mounted rack set up.  The E-Bike Kit front hub is built in a 20″ wheel and is the power house using a 36 Volt 15 Ah Li-Ion battery, it weighs about 7 pounds and has a range of 20 plus miles.

I rode it a few weeks back full throttle down to a Mariners game and then home from downtown up and over Fremont Ave (very steep) and beyond, the power dwindled by the time I rolled into the driveway but I was impressed by the juice it gave going up some serious hills.

The one thing I can say about electric assist and the growth in them on the road is that it takes the ” I don’t know if I feel like riding” out of the equation.  After a long day at work or late at night out keeping up with the likes of above pictured Travis,  it’s comforting to be able to put the thumb down and get your butt where you’re going- home to bed!

Stop by and take the Halstead out for a spin, we can set most of our bikes up with the same kit or a cheaper one in the $500 range. This deluxe kit runs around $1,150.00, so it’s an investment but well worth it if it makes your hum drum commute more appealing. 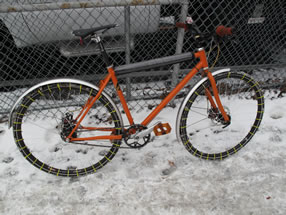